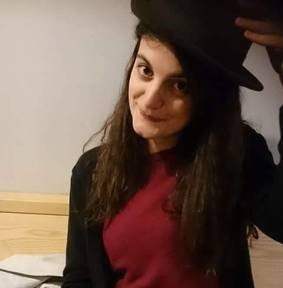 Roula (Spyridoula) Lymniati
Roula Lymniati is a Greek musician, actress and dance researcher. She is a Choreomundus graduate of cohort 3. Her dissertation focused on the Norwegian dance Halling, as a medium for construction and reaffirmation of Norwegian identity. Her fieldwork was conducted at the Norwegian folk music festivals Førdefestivalen and Kalottspel.  She also holds the MA “Musical culture and communication: Anthropological and Communicative approaches of music”, a joint master’s degree of University of Musicology and University of Media and Communication at the National Kapodistrian University of Athens. Her dissertation focused on issues of intellectual copyrights in online music communities and she conducted on-line fieldwork at Jumping Fish, one of the most prominent music e-platforms in Greece. She obtained her bachelor at the Faculty of Musicology in Athens. During her undergraduate studies, she engaged with different aspects of musicology with special focus in Ethnomusicology and Anthropology. She also has a diploma in Acting and a diploma in Classic Guitar from Philippos Nakas Conservatory.
From 2010 until today, she has been working as a performer, and music/creative drama instructor, specialized in projects for children and teenagers. In 2012, she worked as assistant director at a theater tour at schools in Greece, for the celebration of the European Year for Active Ageing and Solidarity between Generations, funded by the European Commission Representation in Greece. After that, she has written and directed two theater plays for children and has toured elementary and high schools with various cultural projects, as an actress, instructor and director.
She has been teaching music and creative drama in public and private preschools, kindergartens and elementary schools in Greece and has given workshops and taught courses of Greek folk dance at undergraduate students in Roehampton University in London and University Blaise Pascal in France.