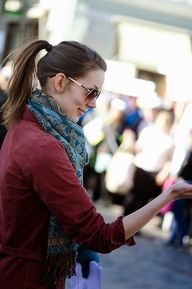 Estonian choreographer, dance educator and performer Madli Teller had acquired a BA in Choreography and MA in Cultural Anthropology & Folk Art before entering the Choreomundus program in 2014. Since creating a BA performance on medieval themes in 2006 she has been working with known Estonian early music ensembles combining historical (Western European court and social) and contemporary dance. For her first MA she analysed gender issues in Estonian staged folk dance particularly in the framework of gender specific mass performances from 2006 to 2011.

Madli has been continuously teaching dance to both amateurs and  professionals from ages 6 to 60 – mainly dance creation and improvisation for children; contemporary and folk dance for teenagers; folk, historical and jazz dance for adults. She has been choreographing for dance studios, choirs, actors and theatre productions. While working at student dance theatre Tee Kuubis from 2005 to 2014 as one of artistic directors and main organizers, her projects dealt with cultural history and arts using role play and methods from informal education. The theatre has been a fantastic playground for plenty of site-specific work, Madli’s favourite focus throughout the years. She loves to bring dance into surprising spaces that become a performer in their own right in the process, and create a possibility to communicate dance to audiences that might have not expected to experience it. Her additional training in historical dance, street performance and youth work has taken place in Finland, Turkey, Italy, France, England and Romania.
Madli is currently preparing groups for the next Estonian Song and Dance Celebration coming in the summer 2019, where she is also assisting one of the stage directors.

Conference 'Terpsichore and her Sisters: the Relationships between Dance and other Arts' (Early Dance Circle, UK, 2016) - Presentation 'Motion in motion – between realms, bodies, and art forms. Arts in India and Anna Pavlova’s travel routes' with Ipshita Rajesh (published in Conference Proceedings)

Abstract:
The European improvisational couple’s turning dances such as waltz, polka and rheinländer (schottische) were some of the most common social dances by the end of 1800s in Estonia. Their definitive technical elements went through considerable transformation when used for mostly stage folk purposes during the 20th century. The dissertation explores how 100 years after their active practice the insights drawn from archival video recordings, from previously published ethnographic accounts, and from participants of ongoing turning technique workshops are brought together into a system of references in an effort to access the technical aspects of the social style of these dances. The dialogic, somewhat reconstructive process involving archive, traditional and innovative pedagogy and embodiment becomes relevant for technique-focused knowledge building in the social dance community. Using content analysis, the factors contributing to turning experience as expressed by the informants are mapped out. They exceed far beyond the ‘proper’ execution of steps, posture or hold, which suggests the potential for more specific investigation. In the study process, the issues of conducting virtual ethnography and the potentiality of disembodied access to the field arise due to the methods of data collection employed.