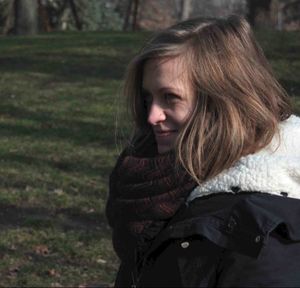 Kinga Szemessy is a Hungarian dancer and researcher, particularly within the field of contemporary dance. As a graduate of the second cohort her thesis focused on the ambiguities of Gaga, an improvisation based movement system originated from Ohad Naharin, former artistic director of the Israeli Batsheva Dance Company. Kinga holds a BA degree as a Dancer from the Budapest Contemporary Dance Academy (BCDA), and obtained another BA diploma at the University of Pécs in Hungarian (Literature & Linguistics), Theatre and Film Studies.
Since her Choreomundus graduation in 2015, she visited the United States as a CEC ArtsLink fellow (guest artist at the Dance Department of the Ohio State University), took part in various community and inclusive dance workshops (Candoco TTI, Liz Lerman's Dance Exchange etc.), and also in seminars of theoreticizing contemporary choreographies (EEPAP / Xavier Le Roy; Antistatic Festival / Rudi Laermans etc.). Furthermore she co-led several workshops as an intern at the Colombian NGO Embodying Reconciliation, run also by former Choreomundus graduates.
Currenctly she is a faculty member at BCDA, and a PhD student (also lecturer) at the University of Theatre and Film Arts Budapest, furthermore an enthusiast participant of the artivism workshops organised by a Hungarian NGO called Artemisszió. Occasionally she teaches high school students in the frame of the Hodworks school projects, and publishes articles in the local theatre & dance periodical, Színház, too.
Just like in her teaching, she intends to keep a good balance of practice and theory, meaning to critically analyse the wider dance field, but also to engage in artistic creations. Formerly her main project was to present ideas around the body as an (evolving) archive, which resulted in solo and group performances (Watching someone dancing, Body Journal etc.) presented in London, Columbus, Oxford and Budapest. At the moment she is committed to work on a new project with Choreomundus cohort 4 graduate Urvi Vora - it's debut is due in May 2018.
Keywords to her heart: politics of participation, display of non-conventional bodies within conventional dance stage settings, affect and communitas, hiking, Nutella, hot tub, Mate tea, coasters and fruit stickers (beware: a serious collector!), friends, listening.