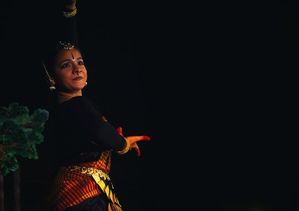 Ipshita Rajesh is a dancer-storyteller, an educator, and a researcher. An Indian national currently residing in Stockholm (Sweden) Ipshita has trained in Bharatanatyam for 23 years under the tutelage of renowned gurus in India. This intensive training coupled with a love for stories ignited a passion in her to bring both popular and unheard tales through a myriad of expressions and movements, using elements of dance, music, story-telling, and theatre. Her most recent performance was a role in the theatre-dance-music-circus show called The Phantom Queen for the opening of the Belfast Mela. Prior to this, she has also collaborated with Choreomundus alumni and multi-disciplinary artists of Malay, Indonesian, and Hungarian origins for a show that she curated called Maa..What If? - an audio-visual anthology of the poems of Tagore based on the relationship between a mother and her child. This was performed for the Night of the Museums, Autumn 2015 at the Mora Ferenc Museum, Szeged (Hungary). A more classical solo dance-theatre was Navarasa to Ramarasa - an exploration of humanity in divinity that premiered in and toured India, followed by performances in Trondheim (Norway) and Szeged (Hungary) based on the different renderings and local folk narratives of the Indian epic Ramayana.

Ipshita has been teaching Bharatanatyam for the past six years, four of which have been its transmission through videoconferencing over the internet to students in the US of A and Australia, thereby integrating technology and tradition. She has also given Bharatanatyam term-classes at Univesité Blaise Pascal and lecture-demonstrations at University of Nice Sophia-Antipolis. Ipshita has co-authored and co-presented a paper titled Motion in motion - between realms, bodies, and art forms: arts in India and Anna Pavlova’s travel routes (in press) at the biennial Early Dance Circle conference on Terpsichore and her Sisters: Dance Among her Sister Arts at Freith (United Kingdom) that dealt with the links between Indian sculpture and dance. She has also been instrumental in conceptualising Sahrdaya, a series of monthly lecture-demonstrations in dance, music, Indology, Sanskrit, and mythology for the local communities in Mumbai (India), thereby making these more accessible.

Apart from a Bachelor and Masters degree in Bharatanatyam from India, Ipshita is the first Indian to receive the Erasmus Mundus scholarship for a Masters in Dance Knowledge, Practice, and Heritage (Choreomundus), a joint programme by four renowned universities in Norway, France, Hungary, and the United Kingdom. As a part of her Masters dissertation, she conducted anthropological fieldwork on the transmission of Bharatanatyam in France, studying how in the process of teaching and learning the dance, the Indian philosophical and value systems too are embodied, creating re-encultured bodies.