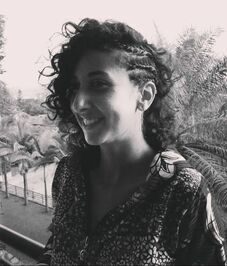 Eloisa Lamilla Guerrero (Born in Colombia, 1987) is an anthropologist with two master degrees; one in Social Anthropology (Bogotá, 2011) and another in Dance Knowledge, Practice and Heritage (Choreomundus, 2018). She uses an inclusive and participatory approach to her social research, with more than seven years working in the identification, inventory and safeguarding plans of intangible cultural heritage, curatorial projects, pedagogical routes and communitarian tourism programs.

She has a strong background in fieldwork with communities of farmers and fishermen of the Magdalena River, peasants and artisans of the Andean Highland, indigenous people of the Amazonian Rainforest, and other cultural bearers in Colombia as well as the North-West of Uganda. Some of the most significant projects that she has worked were: the anthropological study of the UNESCO World Heritage Site, San Agustín Archaeological Park (2009), the research and participation in the Smithsonian Folklife Festival Colombia: the Nature of Culture (2010-2011), the elaboration of the dossier for UNESCO to the Declaration of the South of Ricaurte Providence as World Cultural Heritage (2012-2014), production of the museological and curatorial plan of the Cemetery of San Pedro (2014-2016), among others.

She is also interested in the complex yet fascinating connection between dance and death during the mourning process. This interest led to her research about the dances for funerals in Lugbara communities from the West Nile of Uganda (2018). Currently, she is working in projects the researching and conceptualization of regional museums and cemeteries, both in Colombia.