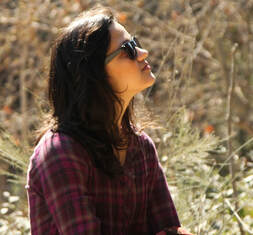 Alejandra is an educator, blogger and movement practitioner born in Medellín Colombia. She has studies in psychology and a Bachelor degree in Philosophy, Literature and Education, which she completed with the thesis “Madness, language and Cogito: Approaching Otherness”. In fact, one of Alejandra’s academic interests has been the critique and deconstruction of the “ratiocentrism” of Western culture which has “invisibilised” and marginalised other ways of knowledge such as the ones generated through the body and the arts.

It was from such critique that Alejandra became interested in exploring literature, poetry, performance and dance as legitimate and fundamental ways of producing and transmitting knowledge about one-self and the world. Her passion for dance, languages and traveling led her to study the “Choreomundus International Master in Dance knowledge, Practise and Heritage” across four different European countries and enriched by the knowledge of classmates from 13 different countries.

Alejandra, who works as a language and dance teacher, is also an activist for the rescue of the body in early years and primary education. Working in different initiatives such as “Maths Dance” in London or “body language” classes for children in Colombia, she has tried to promote the importance of a body-centred education for children development, and the huge benefits of arts education throughout life.
Creative writing and travel blog: https://aleverdemar.wordpress.com/
Powered by